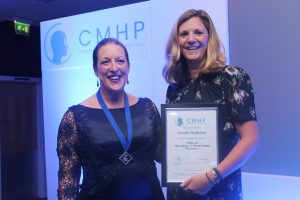 Hannah Macfarlane has been appointed Fellow of the College of Mental Health Pharmacy in recognition of her exceptional contribution to the field of mental health pharmacy.

Hannah is a Teaching Fellow in the School of Life and Health Sciences, Aston University and Lead Clinical Pharmacist (Birmingham and Solihull Mental Health Foundation Trust).

She demonstrates a passionate commitment to delivering high quality education to pharmacists keen to specialise in mental health. In addition to her role at Aston University, she has presented on CMHP’s Psych 1 for many years and continues to deliver one of the most successful and consistently well-rated sessions.

Hannah was Education Lead for CMHP from 2014-2017. During this time, she spearheaded the peer review of the Psych 1 course content – providing a clear mark of quality and reassurance to applicants and employers. She also developed the Psych Techs course, working with pharmacy technicians to deliver a unique opportunity for pharmacy techinicians to network and learn from each other. The inaugural event in 2017 was very successful and the course has become an important component of the CMHP education portfolio.

Hannah has demonstrated great ability and high quality in her work, which has been recognised at various stages in her career. She won the Helen Tennant Memorial Prize on completion of her Diploma in Psychiatric Pharmacy in 2009; she became a credentialed member of the CMHP in March 2011.

Her colleagues who nominated Hannah for this prestigious accolade said: “Fellowship of the College should not be awarded lightly and should only go to those who make a true and tangible contribution to the work of the College.  Not only has Hannah done that, but she enables others to do that, too.  There are very few people who deserve this honour as much as Hannah Macfarlane.”

Hannah was presented her award at the CMHP 2018 Awards ceremony during the CMHP Annual Conference in October.

“Hannah is one of the hardest working people I know.  She has made a huge contribution to mental health pharmacy and to the college.”

Afterwards, Hannah said she was surprised to be awarded this prestigious honour, and in her typically modest style commented: “I enjoy my job but really I’m just doing my job!”  She went on to add: “I would like to extend my thanks to CMHP and to the person who nominated me and those who supported the nomination and also to all those people with so many kind words for me after the award was announced at conference.”